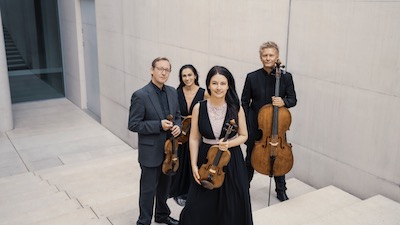 The Minguet Quartet, founded in 1988, is one of the most internationally sought-after string quartets today and gives guest performances in all the great concert halls of the world. The passionate and intelligent interpretations of the Minguet Quartet always ensure inspiring listening experiences – “for the joy in sound and expression with which the ensemble makes the works speak enlivens even the smallest detail”. (Frankfurter Allgemeine Zeitung)

The namesake of the Quartet is Pablo Minguet, a Spanish philosopher of the 18th century who attempted, in his writings, to facilitate access to the fine arts for all sectors of the population – and this idea is a chief artistic concern of the Minguet Quartet touring for concerts around the whole world.

The Minguet Quartet performed at the Salzburg Festival 2020 and 2021. Further stations of the season 2020/21 have been concerts at the Cologne Philharmonie, the International Brucknerfest Linz and the Rheingau Musik Festival. Future projects in 2021/22 include concerts at BOZAR Music Brussels, the Meistersingerhalle Nürnberg, Alte Oper Frankfurt, the Théâtre des Abbesses Paris and Festspiele Herrenchiemsee.

The ensemble concentrates on the Classical-Romantic literature and modern music in equal measure, and has proven its commitment to compositions of the 21st century through numerous premieres. Encounters with important composers of our time inspire the four musicians to create ever new ideas in programming. The first complete recordings of the string quartets by Wolfgang Rihm, Peter Ruzicka and Jörg Widmann are amongst their most important projects. For the 70th birthday of Manfred Trojahn a recording including the first performance of his second string quartet with clarinet and mezzosoprano after poems by Georg Trakl was released in 2019 (wergo), followed by a portrait CD of the composer Konstantia Gourzi in 2020 (ECM). Outstanding highlight of the last years was the performance of Karlheinz Stockhausen’s Helicopter String Quartet as part of a conception by the conductor Kent Nagano.

Partners of Minguet Quartet include the soprano Juliane Banse, mezzosoprano Tanja Ariane Baumgartner, the clarinetist Matthias Schorn, the pianists Claire Huangci and Michael Korstick, the violinist Franziska Hölscher, the violist Gérard Caussé, the cellist Jens Peter Maintz and the bandoneonist Victor Villena. As solo quartet the Minguet Quartet played with the WDR Rundfunkchor, the DSO, the Radio Symphony Orchestras of SR, hr, WDR and ORF, with the Brucknerorchester Linz and the Nürnberger Symphoniker under the conductors Jukka-Pekka Saraste, Markus Stenz, Peter Ruzicka and Ilan Volkov.

With the complete CD recordings of the string quartet literature of Felix Mendelssohn Bartholdy, Josef Suk and Heinrich v. Herzogenberg (cpo), the ensemble proudly presents its great musical culture, opening up to the public the discovery of impressive music of the Romantic period. In 2020 a recording with string quartets by Emil Nikolaus von Reznicek was released. In the upcoming years the Minguet Quartet will record the complete work for chamber music by Heinrich Kaminski and Walter Braunfels, music by Alberto Evaristo Ginastera and the unique string quartet by Glenn Gould.

In 2010 the Minguet Quartet was awarded the coveted ECHO Klassik followed by the Diapason d'Or in 2015 and the scholarship RELOAD by the Kulturstiftung des Bundes, Germany, in 2020. As an important cultural mediator the Minguet Quartet was selected in 2022 for the realization of the project „EifelKlang“ in cooperation with NEUSTART KULTUR - Die Beauftragte der Bundesregierung für Kultur und Medien.